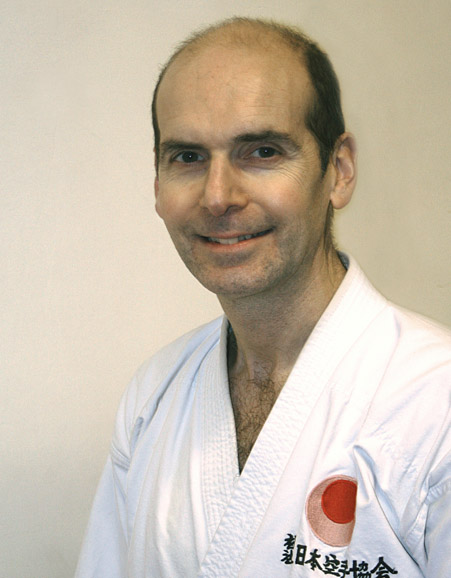 Chris discovered Karate in Paris when he began his training at the Academy of Sensei Pascal Plee. He also regularly attended courses held by Sensei Kase (Sensei died on the 24th November 2004).

Married with four children, he worked for a bank, firstly in Paris and then in London – where he relocated in late 1998. Looking for a dojo, he joined Lewisham Shotokan Karate Center (LSKC) and its sister dojo Beckenham Shotokan Karate Club. He trains regularly at both these locations.

In 2019 Chris was promoted to 3rd Dan. He has been a regular competitor in regional and national Kata, team kata and kumite events in the UK. Currently he holds Instructor level 2 and Referee level 2 qualifications. These allow him to referee and judge in national, regional and inter-club competitions – which he does on a regular basis.

He also once attended courses in Japan and wants to return again as soon as possible.

A regular attendee at JKA-England's Regional, National and International courses, Chris is still as passionate as he ever was about Karate and he enjoys training regularly with Sensei Roy Tomlin 6th Dan JKA.